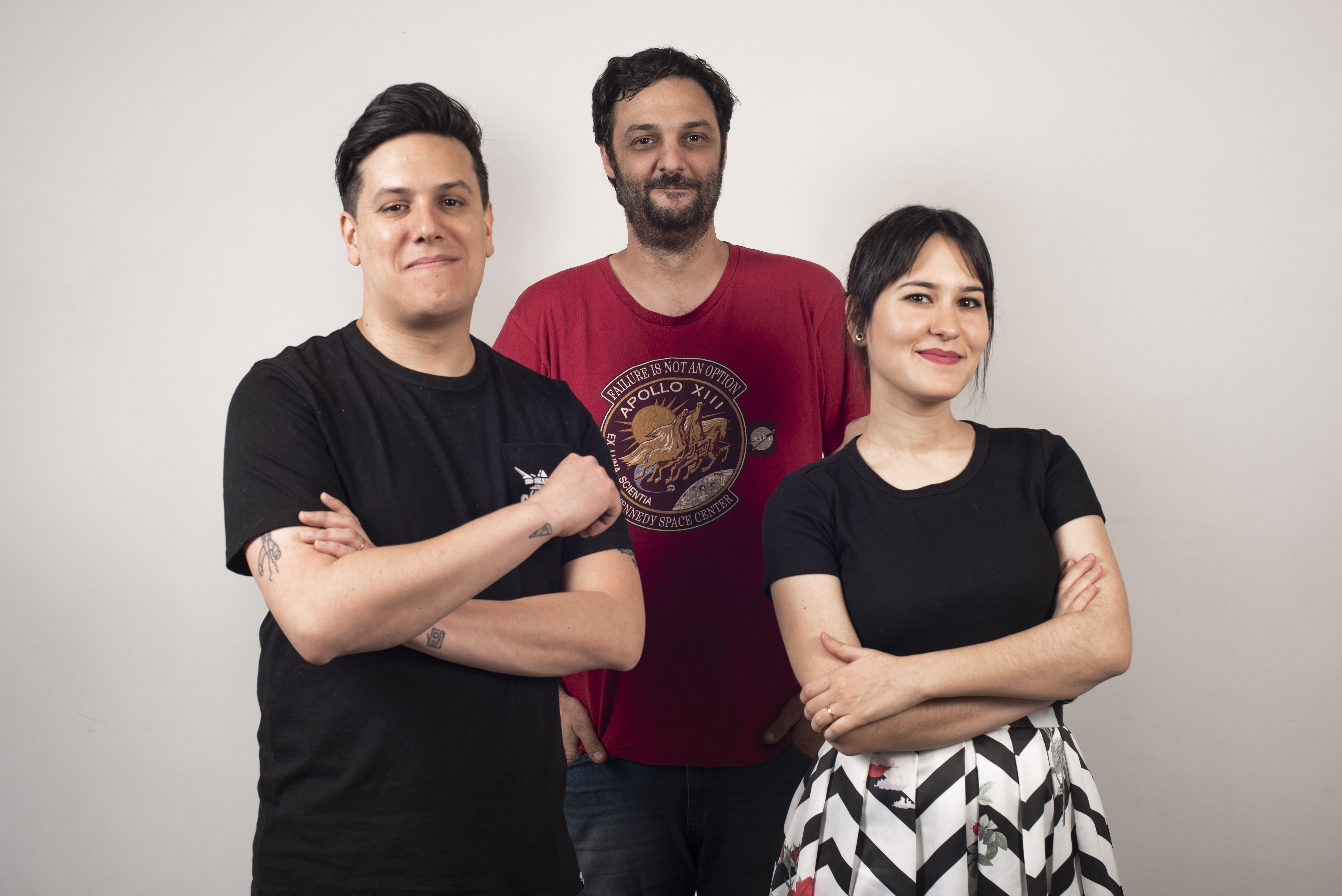 Posta was a young podcast production company when selected for the Velocidad media business accelerator program. Even though the organization was founded in 2014, the team behind Posta had not even calculated the company’s first balance when selected for Velocidad in early 2020. Posta founders, Diego Dell’ Agostino and Luciano Banchero, suspected they had a stable startup with a business model that could be improved. They also recognized it would be a challenge to optimize that business model, especially from a financial point of view.

At the beginning of the Velocidad accelerator, Posta identified one priority: to ensure all of the company’s finances made sense and were justifiable. Organizing and professionalizing Posta’s financial management allowed the team to anticipate problems and tackle them in new ways. This financial restructuring was especially critical as the Posta team considered launching a daily, journalism-oriented podcast.

Now, a year and a half later, Posta is an example of how planning and decision making early on can create opportunities and attract more clients. What’s more, in line with the Posta team’s current strategic objectives, this financial organization has allowed the company to strengthen its presence regionally.

The Challenge of Improving Processes

As they worked to expand their team, one of the first things they realized was that this setup was not viable anymore. “Back then, we had one or two clients; but today, with over 25 clients, it wouldn’t be sustainable,” said Banchero.

Posta joined the Velocidad accelerator needing to refine organizational processes and make them more efficient. Would Dell’ Agostino and Banchero have been able to continue on by themselves? Dell’ Agostino thinks it would have been possible. At the same time, he acknowledges that their somewhat disorganized structure directly affected their ability to grow the company. The lack of process-related organization caused problems in different aspects of Posta’s operations, from registering new clients in their system, to invoicing existing clientes, to analyzing and reviewing finances. Challenges also arose when crafting funding proposals, as well as managing budgets and suppliers.

“Given we want to start a daily podcast with a journalism component, we need to accurately estimate how long people will be working on a given project, how much they will be paid and where will that funding will come from,” said Dell’ Agostino. These same questions also apply to expanding Posta and attracting new clients.

Dell’ Agostino and Banchero determined that, if they resolved these questions, they could more effectively plan ahead, as opposed to wondering what the next week would look like, what projects were coming to a close and which clients owed them money.

As a result of the Posta team’s high-quality work producing audio content, the company had potential to expand its client base coming into the Velocidad program. Sebastián Auyanet was the Velocidad strategic consultant who worked with Posta during the first phase of the accelerator, between March and September 2020. In his opinion, Posta needed, “… better administrative and forward-looking planning; it was necessary for them to keep growing.”

To achieve this, it was crucial for the Posta team to hire the right person for a new role managing the organization’s finances. With this in mind, at the beginning of the Velocidad program, the Posta team focused on defining the position and recruiting a chief financial officer.

“Adding roles like a CFO let both founders focus on the internal operational aspects of their startup,” said Auyanet. “Both [founders] Diego and Luciano love their work with Posta. Financial management, with all of its complexities and challenges, was an obstacle which limited their ability to spend their time working in their areas of expertise, which is what they needed to do for Posta to keep growing,”

The CFO looks after the company’s financial well-being, planning budget processes, managing payments and negotiating with clients. As part of the Velocidad accelerator program, Posta also hired another staff person to be in charge of managing accounts. This person handles current projects and serves as a liaison between clients and the production team.

One of the first tasks for this new team was to standardize the timeline and processes when working with suppliers. They started by identifying obstacles and process-related sticking points that prevented projects from reaching completion.

In addition to organizing the number and order of financial tasks, the team also recognized that they needed to improve Posta’s financial planning. The finance team had to be able to foresee how much money was coming into and going out of the company 180 days in advance. “It’s one thing to deal with standard financial forecasting errors, it’s another thing entirely to receive 80 pesos and not know where they came from,” said Dell’ Agostino.

Posta now has financial projections for the next year, something that, until a few months ago, the company had never done before. These projections will allow the Posta team to anticipate possible setbacks and plan for the future. Posta now has a three-year budget that includes new areas for business expansion and breaking into new markets. “We have a clearer idea of the three-dimensions of our business. Before, we only cared about two things: producing content and disseminating it,” said Banchero. “We didn’t have any projections, and it required a lot of effort for us to understand our overall income. Now, we are asking questions about resources, budgets and sales. We started thinking practically to define what our goals were and what we could accomplish with our current business model,” said Banchero.

Banchero also said it is important to not underestimate the importance of creating a plan. For years, Posta moved forward blindly with short-term arrangements. Now, they are thinking more strategically, being mindful to make decisions based on current plans and long-term projections, as opposed to improvising. “Nowadays, we are a company with a business model and a team,” said Banchero.

This year, the Posta team restructured the company’s daily journalistic podcast “Esto Pasó Posta” into a weekly show with a broader reach. It also launched a new daily podcast, “5 minutos más” to lead “Ruta Diaria”, Spotify’s curated playlist in Argentina. Posta also participated in the development of “En Foco”, another podcast included in the Spotify playlist, produced by Red/Acción (another media outlet in the Velocidad accelerator program) and “El Podcast de Chequeado,” produced by Chequeado, a fact-checking media outlet.

Posta is currently organizing a regional, virtual journalism event geared toward a variety of audiences, including media outlets, media industry colleagues, sponsors and brands interested in new audio formats. “Posta is synonymous with podcasting. It is a true leader in the region that now also has direct experience in developing high-quality audio journalism projects,” said Juan Simo, the strategic consultant for the Posta team in the second phase of Velocidad. “They can help other Latin American media outlets that want to go in the same direction. They’ve designed and launched an impactful product with regional appeal that thoughtfully considers all stages of the production process,” he said.

The journalism event the Posta team is organizing is directly tied to scaling up their products for an international audience, a goal Posta’s team set for the December 2020 – September 2021 portion of Velocidad. Led by Helga Zambrana, who leads Posta’s new markets department, this initiative focuses on exploring production possibilities in Latin America. To start, the Posta team is looking at expansion opportunities in Brazil and Chile.

“We want to work with more than two clients. We want audio journalism in the region to reach its full potential. We want podcasting to grow and be taken seriously as a new media format,”

Mario Postay, a tactical consultant who assisted Posta with financial matters, also said that, as part of the company’s regional plan, the team focused on building a solid investment pitch deck for investment funds and other options to obtain risk funding.

To meet organizational goals, a media outlet needs to be able to adapt and respond to challenges, such as the emergence of a new major client or the need to expand or reduce team size. To be able to handle these changing needs, a company has to think ahead. Organizing the company’s financial management allowed the Posta team to work toward positioning the organization for regional growth equipped with new skills.

— Thanks to the Velocidad accelerator as a whole and especially to the work the Posta team did with consultant Mario Postay, Posta successfully participated in Demo Day in May and June 2021. Organized by Addventure, an angel investor group, the event happens once every four months. Posta made it through an initial round of 30 projects and became one of five finalists later contacted by club members to talk about potential investments.

— Knowledge gained from making the “Esto Pasó Posta” podcast also had an impact on the Argentine journalism ecosystem. Posta took part in designing En Foco, a podcast produced by Red/Acción, another media outlet in the Velocidad accelerator program. The Posta team also assisted in the design and production of “El Podcast de Chequeado”, a podcast from the Argentine fact-checking media outlet Chequeado.

— As part of both phases of the Velocidad accelerator, Posta incorporated two key strategic positions into its organizational structure: a chief finance officer and a new markets officer dedicated to regional expansion. Both of these roles have improved how responsibilities are distributed among team members.